Nuno Vasco Munhoz Peixinho Miguel, a.k.a. Nuno Peixinho, is the Portuguese Delegate at the European Southern Observatory Users' Committee (ESO UC), a National Astronomy Education Co-Coordinator (NAEC) of the International Astronomical Union (IAU), he was Co-Assistant Director of the Geophysical and Astronomical Observatory of the University of Coimbra (OGAUC) and he is the Coordinator of its Astronomy and Space Sciences Promotion Unit (UPACE), being also a Member of the Scientific Council of the Institute of Interdisciplinary Research of the University of Coimbra (IIIUC). He is Member of the Directory Board of the Teachers' Union of the Central Region (SPRC/FENPROF), and a Member of the Directory Board of the Association of Research Grant Holders (ABIC). He teaches Planetary Sciences at the Physics Department of FCTUC, he operates the Planetarium of the University of Coimbra, and he is a volunteer observer of OGAUC's Spectro-Heliograph in order to keep its daily service of solar observations running unbrokenly since 1926. He has been awarded with the naming of asteroid (40210) Peixinho. 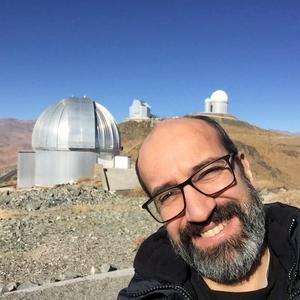